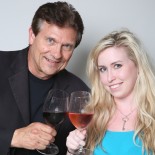 Covering the dining scene in and around the OC

I wanted to take my intern, Samantha Smith – a young singer/songwriter who usually spends the summer in France with her parents while the family rents out their Newport Beach home for the summer – someplace fun for lunch.

Because Sam and her parents stayed in OC this year, Sam was missing out on all the French delicacies she usually enjoys, so I thought I’d help fill the void by bringing France to her via Pascal’s Epicerie in Newport Beach.

“This place is showcasing all of my favorite things from France,” Sam said as she pointed to the small arrangement of quintessential French soaps and related the story behind the classic Mère Poulard shortbread cookies, which originated in the 8th century monastery Mont Saint Michel in Normandy.

“This restaurant is giving me major nostalgia. It’s really the epitome of France.”

“Wait until you taste the food,” I told her.

We stuffed ourselves with paninis, crustless quiches, and a trio of salads (kale, green beans, and salmon), and then admired the colorful macarons in the display case as Chef Pascal walked out of his kitchen with a large tray of macarons.

Pascal makes his Parisian treats on site, and usually has eight different flavors from which to choose.

I asked Pascal the secret to making a good macaron, and surprisingly, he told us that “if you eat it fresh, it’s too soft. You have to wait 24 hours for the crust to get crispy outside and the filling to stay soft inside.”

Pascal should know: his Epicerie has been a staple in OC for nearly two decades, and he may have been the first chef in this area to make macarons.

I learned that the macaron crust is made of almond flour, and all the macarons are gluten-free – even the filling. Pascal makes forays to France and brings back the natural and organic flavorings, which makes his macarons truly authentic desserts.

So when is a good time to eat a macaron?

“They’re great for any occasion: as party favors, at teatime or breakfast, maybe the last bite before you go to sleep. There’s always a good reason for a macaron,” laughed Pascal.

Pascal makes an assortment of other small desserts and larger cakes…

…but it’s hard to resist those petite round cookies called macarons–especially when they’re made by a macaron master like Pascal. 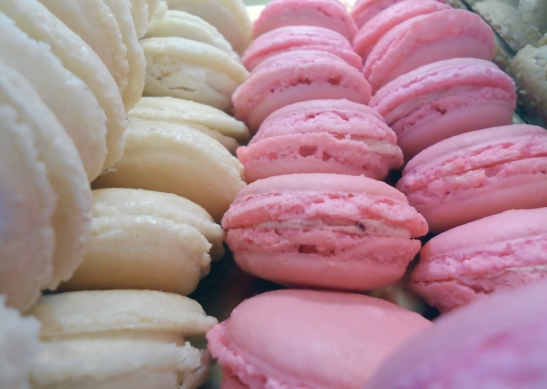